Just for fun, I’m going to give you a little glimpse of the YA mystical fantasy novel I’m writing, with the working title: The Unicornologist.

It’s set in 1967. To give you a feel for the time, here is what a McDonald’s hamburger stand (the setting of chapter five) looked like: 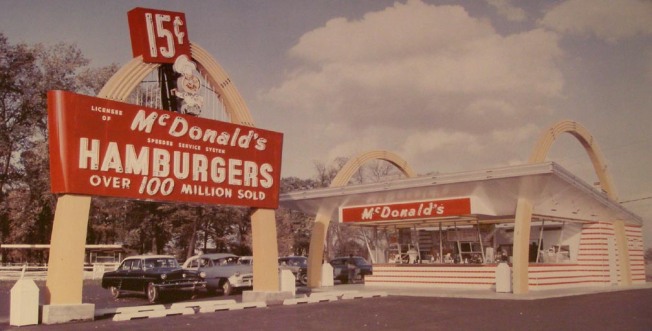 No drive through. You had to park your car and walk up to the sliding glass window to order, and wait for your food to be packed into a bag. No dining room. Some McDonald’s had a bench built into the exterior side wall, but most people just took their food back to their cars and ate while parked in the lot. And, yes, a hamburger cost 15 cents.

My story centers around a New Jersey high school freshman, Hillary Noone, whom I picture as looking something like the girl on the right, except with glasses. She’s a nerd. Her mother died when she was eight, and her father recently remarried. Hillary, an only child, resents her stepmother, who kind of took over when she moved in, not respecting the routines that Hillary and her dad put into place to cope with her mother’s death.

Hillary’s best friend is her neighbor, Allie, who  wears her hair like Twiggy (see the image to the left), a popular British model in the late 60’s, nicknamed after her slender figure. Hillary and Allie grew up playing in the forest that surrounds their homes, and even have a tree they like to climb (where they talk about their problems and dreams), looking something like the big cedar tree to the right below.

The story really gets going when the girls go on a school field trip to the Cloisters in New York City, the medieval branch of The Metropolitan Museum of Art. (See my previous post, Cloister Me.)

While examining the Unicorn Tapestries housed there (see my previous post, Unicornucopia), something happens that imprints the unicorn in her heart. She becomes obsessed by unicorn lore and learns everything about them, especially their use as a symbol in medieval art.

That’s all I’m telling for now, but at a later date I’ll spill more about Allie and Hillary, and about Robin, the boy they both fall for. And about how complicated things get for all three of them when life imitates art.

ARHtistic License is a forum for creative ideas. Be part of the dialog! Add your thoughts and experiences in the comments section below each post. Feel free to add a relevant link.
Join 1,383 other followers

#Zentangle pattern Rambles
#Books I can’t wait to read. #readinglist
Learning how to use my #HandiQuilterMoxie with #ProStitcherLite (robotic, not free motion) #longarmquilting #quilting #amquilting
Working on learning how to use my quilting machine. I have a slow learning curve. These are supposed to look like “e” and “l”. #quilting #longarmquilting #freemotionquilting
Got my Moxie! #longarm #quilting
#electionday2022 #voting #votingpoem