Michelangelo (not that Michelangelo) Caravaggio (29 September 1571–18 July 1610) was a man of contrasts: a master painter and a violent hothead.

He studied under Simone Peterzano in Milan. In 1592 Caravaggio left Milan for Rome, to escape prosecution for “certain quarrels” and the wounding of a police officer.

His first true masterpiece was The Cardsharps, a psychological study of a naïve youth falling victim to card cheats. Its popularity attracted the patronage of Cardinal Francesco Maria del Monte, one of the leading connoisseurs in Rome.

Caravaggio’s reputation grew with his paintings on religious themes, and the emergence of remarkable spirituality in his art. But true fame would depend on public commissions, and for these it was necessary to look to the Church. 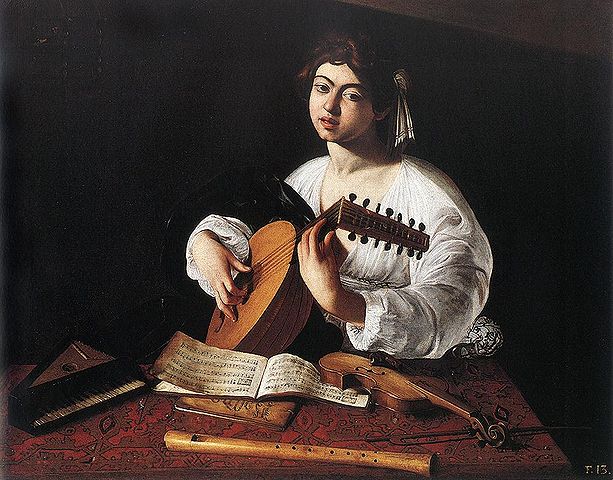 In Rome, there was a demand for paintings to fill the many huge new churches and palazzos being built at the time. The Roman Church was searching for artistic ways to counter the threat of Protestantism. Caravaggio’s innovation was a realism born of close physical observation combined with chiaroscuro, a dramatic technique of highlighting the otherwise deeply shadowed subject with a brilliant shaft of light. He preferred to paint his subjects as the eye sees them, with all their natural flaws and defects. Some denounced him for his deviation from accepted classical idealism of Michelangelo (yes, that Michelangelo) and for painting from life, without drawings, but for the most part he was hailed as a great artistic visionary.

The Taking of Christ, Caravaggio

For the most part each new painting increased his fame, but a few were rejected by the various bodies for whom they were intended, at least in their original forms, and had to be re-painted or find new buyers. While Caravaggio’s dramatic and emotional intensity was appreciated, his realism was seen by some as unacceptably vulgar.

His first version of Saint Matthew and the Angel, featuring the evangelist as an old, bald peasant whose clumsy hands were directed by a lightly clad boy-angel, was rejected as being disrespectful and inappropriate, and a second version had to be painted as The Inspiration of Saint Matthew.

St. Matthew and the Angel, Caravaggio

The Inspiration of St. Matthew, my very favorite Caravaggio

Saint Matthew and the Angel  was destroyed during the bombing of Dresden during World War II. The image above left is a colorized black and white photo to the original painting.

Caravaggio’s influence on the new Baroque style can be seen directly or indirectly in the work of Peter Paul Rubens, Gian Lorenzo Bernini, and Rembrandt.

Only about 80 paintings by Caravaggio have survived.

While his artwork increased in skill and in spiritual depth, his behavior became increasingly bizarre, including sleeping fully armed and in his clothes, ripping up a painting at a slight word of criticism, and mocking local painters.

Caravaggio’s violent temper caused problems for him all his life. He was notorious for brawling, even in a time and place when such behavior was commonplace. On 29 May 1606, he killed, possibly unintentionally, a young man named Ranuccio Tomassoni under mysterious circumstances. Rumors hint at a quarrel over a gambling debt and a tennis game. Previously his high-placed patrons had protected him from the consequences of his escapades, but this time they could do nothing. Caravaggio, outlawed, fled to Naples, as he had earlier.

In Naples, an attempt was made on his life by persons unknown. At first it was reported in Rome that the “famous artist” Caravaggio was dead, but then it was learned he was alive, but seriously disfigured.

He later fled to Malta, presumably hoping that the patronage of Alof de Wignacourt, Grand Master of the Knights of Malta, could help him secure a pardon for Tomassoni’s death. De Wignacourt proved so impressed at having the famous artist as official painter to the Order that he inducted him as a knight. Major works from his Malta period include a huge Beheading of Saint John the Baptist (the only painting to which he put his signature) and a Portrait of Alof de Wignacourt and his Page, as well as portraits of other leading knights. Yet by late August 1608 he was arrested and imprisoned for yet another brawl, during which the door of a house was battered down and a knight seriously wounded. He managed to escape. By December he had been expelled from the Order “as a foul and rotten member.”

He was only 39 when he died. Some scholars claim Caravaggio was murdered by the same “enemies” that had been pursuing him since he fled Malta, possibly Wignacourt and/or knight factions. But another theory is that Caravaggio might have died of lead poisoning. Violent behavior can be caused by too much lead in the body. Paints used at the time contained high amounts of lead salts, and bones with high lead levels were found in a grave likely to be Caravaggio’s.

Wikipedia provided most of the information for this article.