When we moved into our home twenty-nine years ago, it was nicely landscaped, with a pine tree and a carob tree and two palm trees in the front yard, juniper bushes lining the driveway, shrubs with red-orange berries climbing between the front windows, and an ornamental plum and four cacti along the front walk. The backyard pool was circled with roses and junipers, and a ring of aloes grew among artfully arranged river rock. Three more palms completed our oasis.

As time passed, plants died, one after another. We tried to keep things growing, but raising our five children was our top priority, and frankly, we were cursed with black thumbs. One palm tree died, then the berry bushes and front yard junipers, then the carob tree. (I was actually happy about the carob, because it dropped these ugly, heavy seed pods that were a pain to clean up.) Two of the cactuses died, but the other two grew into monstrosities. I transplanted the aloes to the front yard, where they thrived and multiplied. I tried brightening up the yard with potted flowers, but the desert heat dried them up. An acacia tree sprang up unbidden, like a weed. I let it grow because, hey, it was green, and it didn’t seem to require any water. Then the pine tree died (also a relief, because it shed needles every time the wind blew). I felt as though our house looked like a blighted abandoned building.

The roses in the back yard passed away early on, because I couldn’t keep up with the aphids. We tired of the junipers and cut them down. After about twenty-five years, my husband gave up dealing with the lawn, and it languished. Another acacia-type tree sprouted in the backyard and proceeded to drop lots of leaves and throw fuzzy green balls into the pool.

The pool, which we had resurfaced in the 1990s, began to deteriorate, as did the cool deck surrounding it.

Years ago, my friend, Janet Waibel, whom I met in Bible study, mentioned she was a landscape architect. I told her someday I would hire her to redo our yard.

The first phase of the work was getting rid of the plants we no longer wanted (as well as an old shed and some junk), replastering the pool, installing a new pool pump, and repairing the cracking pool deck. We also wanted to extend the pool deck, and resurface our covered patio floor to match. Due to delays caused by rains, for a few weeks our backyard looked like this:

After the pool received its new tile and plaster, an irrigation system went in. And then, the magic day when the plants arrived!

If it had been up to me, I would have put in a couple of bushes and a marigold bed. But my landscape architect came up with a much lusher design. She chose plants that don’t require a lot of maintenance. It is so much more than I ever imagined it could be.

We have several of these blue bell plants in the front and back:

We have three new trees in the front: an orange tree, and two of these Mexican bird of paradise:

We also have tecoma “gold star” in the front and back yards: 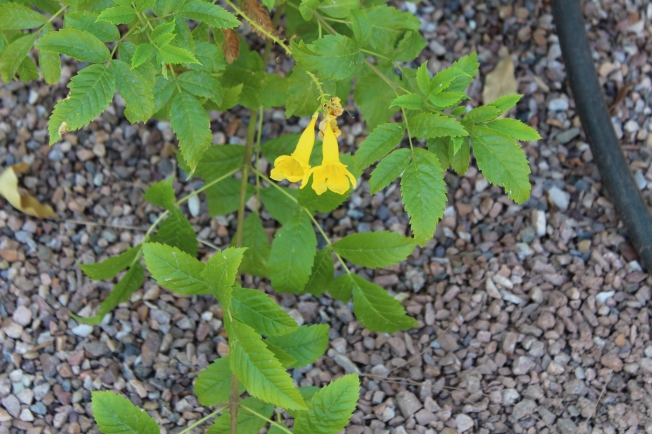 These before pictures show what our overgrown organ pipe and prickly pear cactuses used to look like: 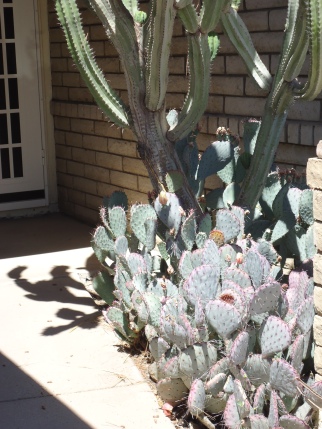 The landscapers took a central portion of the organ pipe cactus and tranplanted it in the front yard:

Transplanting the prickly pear didn’t go so well; they gave us a new baby one (it will grow and multiply): 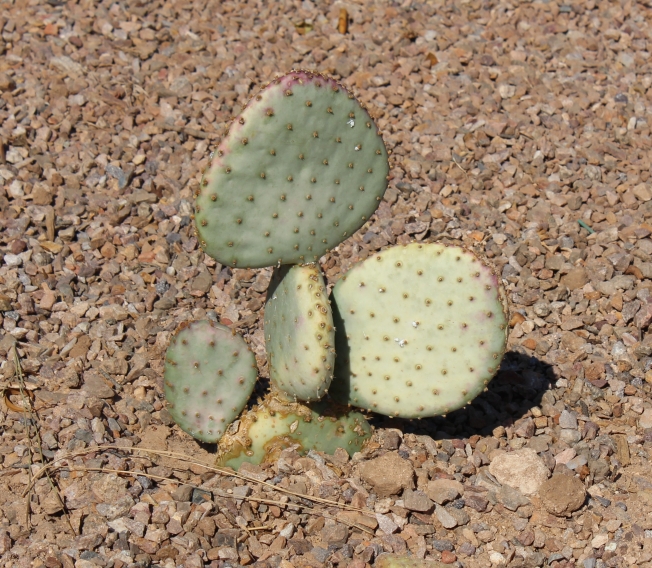 For twenty-nine years, and especially when the kids were young, I wanted a brick path on both sides of the driveway. Now that five muddy little pairs of feet climbing into the minivan are no longer an issue, I finally have my wish:

On the other side of the driveway, along the wall separating our front yard from the entrance to the utility alley, we now have plants that will eventually form a nice screen.

One day my friend, the landscape architect, was here during a downpour, and I showed her a problem we were having with run-off from the roof gutter over the entryway. See the downspout? That area along the left side of the picture would overflow, forming big muddy puddles on the front walk as the water sought lower ground. My friend designed a solution. The landscapers dug a tunnel under the sidewalk and filled it with coarse rock. Now the run-off will give the orange tree an extra-good soaking.

We now have a small but lush grassy area in the backyard. (I am now in charge of mowing it.) 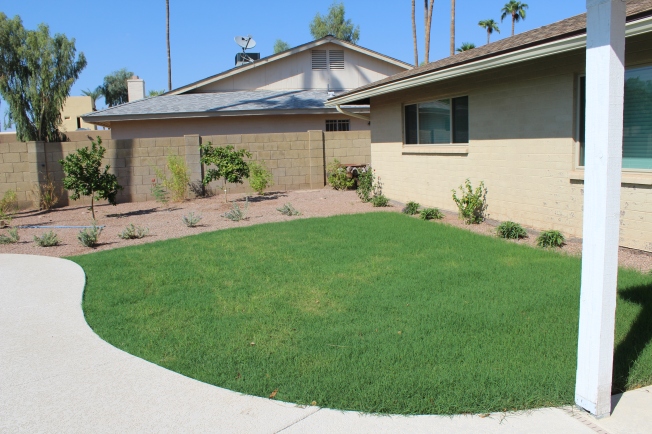 We have several red Mexican bird of paradise plants in the backyard and the front.

We have a new lemon tree and a grapefruit tree in the backyard. We will have lemons this December.

We have two hibiscus plants in the backyard.

We have several ruellia front and back.

Our newly finished pool and deck look so pristine. Staked near the back wall of the yard are vines known as cat’s claw, which will eventually climb along the wall.

We bought new cushions for our twenty-nine-year-old patio chairs. Don’t they look pretty? One late afternoon I took a dip in the pool and sat and read on the patio. I looked up and saw a hummingbird zipping from flower to flower. Life is good.

We bought a new gazebo, which I’d just finished assembling before I snapped the picture; that’s why the ladder is still sitting under it. We had an older gazebo that didn’t really fit on the old pool deck. One corner sat on patio blocks. I’m so glad to have a proper surface now. 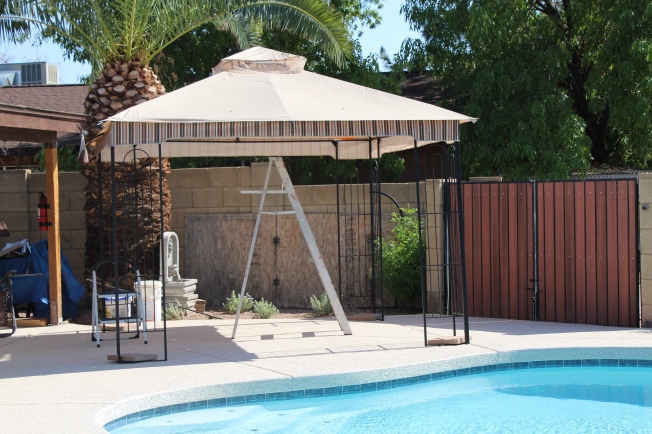 The finishing touch is landscape lighting.

We feel so blessed. The yard has been transformed into a relaxing resort-like retreat. We could never have pulled this off ourselves. Landscape architects are like magicians. Maybe you’ll want to hire Waibel & Associates to design your landscaping.