I’ve often heard people mention Mary Oliver as one of their favorite poets. I’ve always felt I had a distant connection to her since she was on staff at Bennington College when my oldest daughter was a student there.

I’ve occasionally read some of her poems, and I decided I needed one of her books. I chose Devotions because it is a collection that spans her lifetime, with selections from her first book (published in 1963 when she was 28 years old) through her most recent (2015).

The book is arranged in reverse chronological order, starting with the newer poems and ending with the oldest. The more recent work is polished and smooth, a delight to read out loud or silently. As I made my way toward the end, the poems seemed rawer, though no less delightful or skillful. Many poems made me stop to savor the images and emotions; some of the older poems required a second or third reading for me to understand.

Oliver was born on September 10, 1935. She grew up in Ohio and started writing poetry when she was 14 years old. Her collection American Primitive won the Pulitzer Prize for Poetry in 1984. Her New and Selected Poems (1992) won the National Book Award. She and her partner of more than 40 years, photographer Molly Malone Cook, lived much of their life together (before Cook’s passing) in Provincetown, Massachusetts. Oliver now lives in Florida.

A daily walker, Oliver most frequently writes about nature, but also about God and about the human experience. 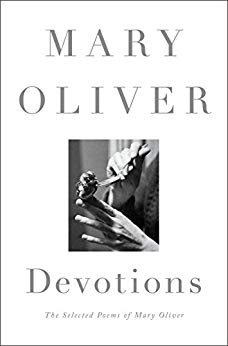 Five poems in this book especially spoke to me.

“Six Recognitions of the Lord” describes six diverse times of meditation. Nature appears repeatedly, as God’s creation is an avenue that draws Oliver’s heart to God. But she also acknowledges the Spirit of God within her, and the darkness of distance from God.

Six Recognitions of the Lord (excerpt)
by Mary Oliver

2.
Lord God, mercy is in your hands, pour
me a little. And tenderness too. My
need is great. Beauty walks so freely
and with such gentleness. Impatience puts
a halter on my face and I run away over
the green fields wanting your voice, your
tenderness, but having to do with only
the sweet grasses of the fields against
my body. When I first found you I was
filled with light, now the darkness grows
and it is filled with crooked things, bitter
and weak, each one bearing my name.

Oliver is a master of word choice. In the poem “Some Herons,” she uses the characterizations of preacher and poet to differentiate between two birds when she could have used simply blue and white. Hunched in the white gown of his wings so accurately paints the heron’s position. The description of the water as if it were fabric makes me nod with recognition. Splashed upward, in a small, quick flower, by the life beneath it is so much more vivid than, say, “the surface was disturbed by the fish below.” His skirts up around his knees makes me smile as I picture the blue heron’s awkward landing. And I can see the white heron’s annoyed expression.

In her poem “A Meeting,” she never uses the words deer, doe, or fawn, yet, from the description of the vigorous licking the mother gives her offspring, the reader knows what species just gave birth in the forest swamp, though Oliver calls the creatures woman and child.

In “Music Lessons,” Oliver describes a time that the teacher took the piano bench and played while the student listened; how the teacher became the music and how the student became aware of music’s transformative power.

I love this rejection of the bustle of twenty-first-century existence:

The Old Poets of China
by Mary Oliver

Wherever I am, the world comes after me.
It offers me its busyness. It does not believe
that I do not want it. Now I understand
why the old poets of China went so far and high
into the mountains, then crept into the pale mist.

Hmm. This reminds me of the bird in “Some Herons” which was referred to as an old Chinese poet.

Devotions: the Selected Poems of Mary Oliver is filled with beauty, with fresh air, with lyrical appreciation, with uplifting meditations, and also with pain, doubt, and questions. Oliver is one of the greatest American poets, and I am happy to have this volume in my collection.