My daughter Carly spent seven and a half weeks in Israel last year, six of those weeks in Hebron (I guess, technically, in Palestine) studying Arabic. She wants to go back this summer, and suggested I go, too. It’s been on my bucket list for thirty years.

Carly warned me, “I don’t understand how this is possible, but I swear every street in Bethlehem is uphill.” I promised her I’d train. I’ve been walking the treadmill at an incline, and I will gradually increase my speed and my height. A friend who’s been to Israel recommended bringing a trekking pole for uneven ground and cobblestones.

Working out on the treadmill is nice, but maybe it’s not realistic. I bought some hiking boots and a trekking pole and headed out to South Mountain Park.

South Mountain Park/Preserve is one of the largest municipal parks in the United States. It encompasses more than 16,000 acres at the southern edge of Phoenix, Arizona.

I used to drive up to the summit of the park with my children when they were young. There’s a cabin-like structure at the top where you can sit, eat a picnic lunch, and enjoy a panoramic view of the entire “Valley of the Sun.” But I’d never hiked there, except for one brief excursion with my kids when they begged to go home after 15 minutes. 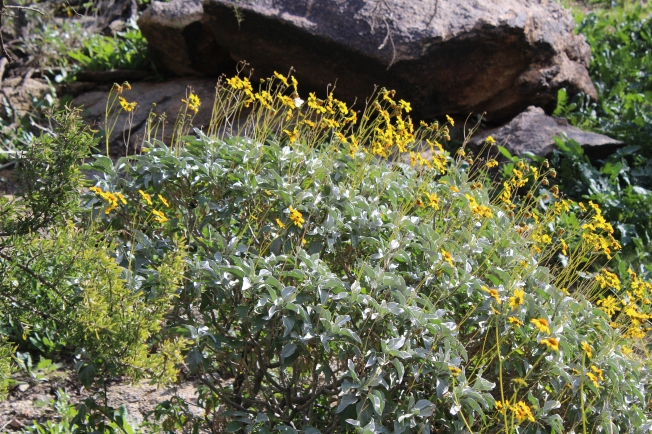 So, now I’m a sixty-six year old beginning hiker with two artificial hips. With the help of Hike Phoenix, I determined that the Kiwanis Trail would be a good place to start.

Thursday late morning I parked my car at the trailhead and looked around. If you follow ARHtistic License, you may have caught on that I love the desert. It’s so much greener than I’d expected when we moved here from New Jersey. I love the rugged rockiness of the desert mountains. 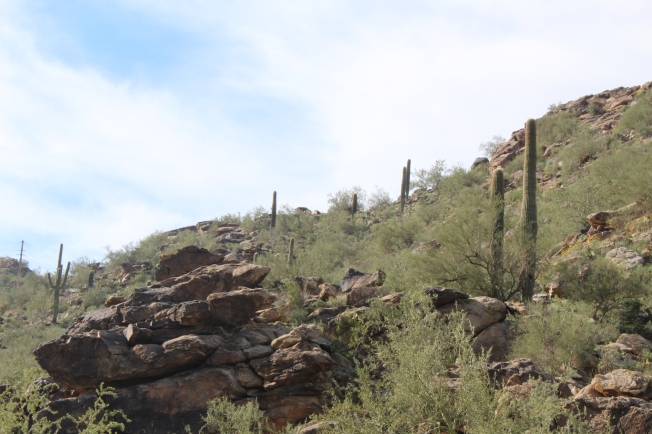 There’s a profound silence in the park, except for the chirping of birds. And the sounds of the jets en route to and from Sky Harbor International Airport, not too far away. And barrages of gunfire from a nearby shooting range. And the disconcerting buzzing of bees busy pollinating the yellow brittlebush and taking detours around my head. 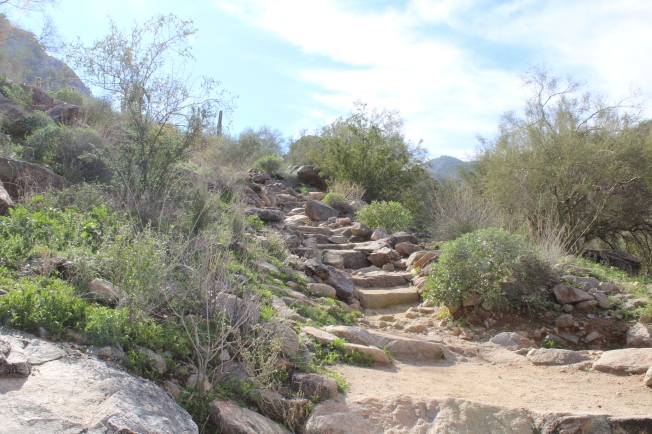 In the 1990s, Africanized honeybees invaded Arizona, and from time to time we heard reports of people and dogs being severely stung and even killed by swarms of the bees in Arizona, and at least one in South Mountain Park. Not so much lately, though.

I discovered I really like the trekking pole. It helped stabilize me on the steeper sections of the trail, and even a gentle push on the pole helped boost me up a big step. I will definitely take it to Israel. 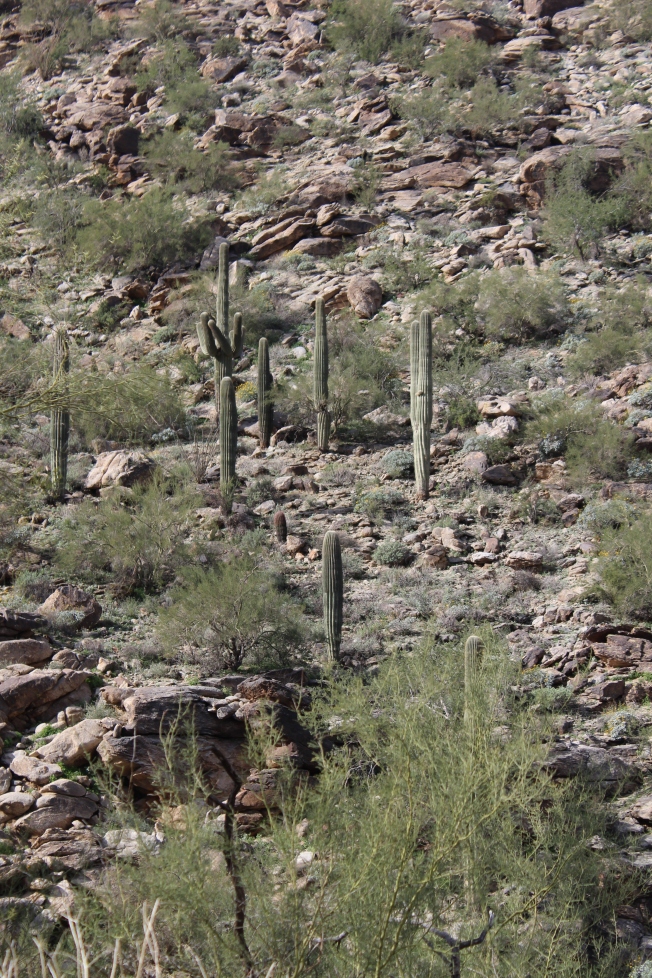 Even though there were quite a few cars in the parking lot, I didn’t see many people on the trail. Part of that might be due to the fact I was there on a weekday; also, I brought my camera with me, and I stopped every few feet to take another picture. The desert looks different every time you change your perspective. 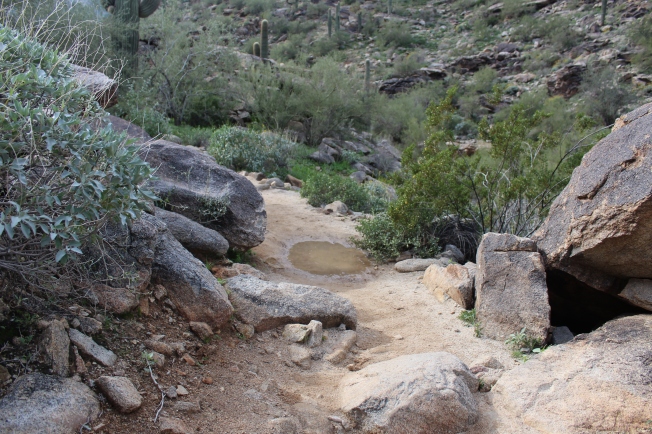 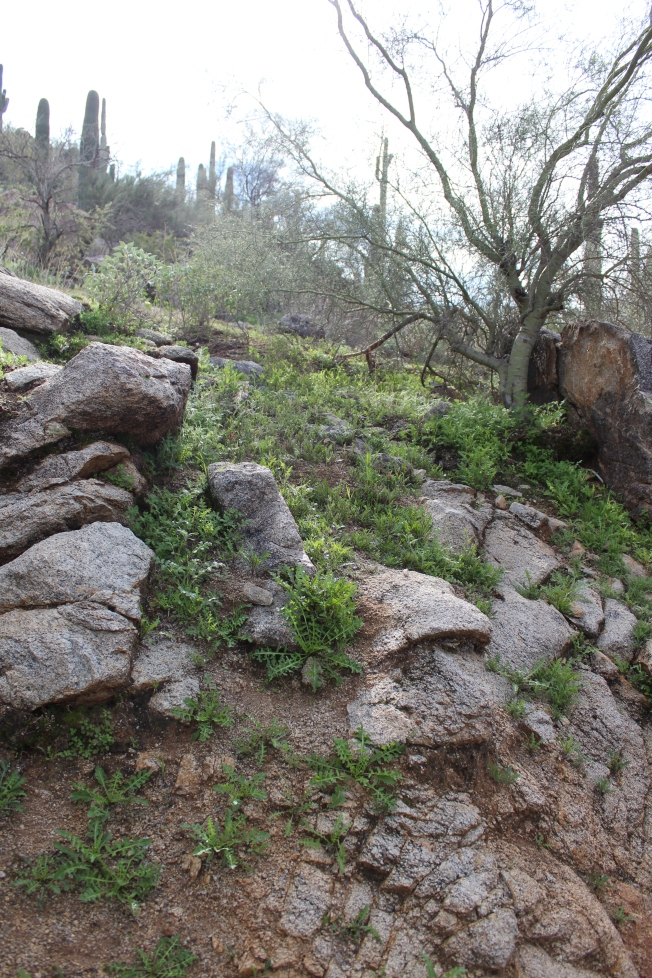 At one point, all I could see ahead of me was a jumble of rocks. Uh oh, I’ve lost the trail. But a couple steps later, I saw it again. I guess my stature of five feet nothing was to blame for my limited vision.

I never reached the end of the trail. After forty minutes, I decided I’d had enough for the day and turned around.

I found coming down the trail more challenging than going up. Again, my trekking pole helped me keep my balance while stretching beyond my normal stride, and kept me from stumbling when my heel caught an outcropping or I landed on a lose rock and almost twisted my ankle. I made it back to the car in twenty-five minutes, taking few pictures on the way down because I needed to concentrate on my footing. (I ended up with a total of 95 shots!) 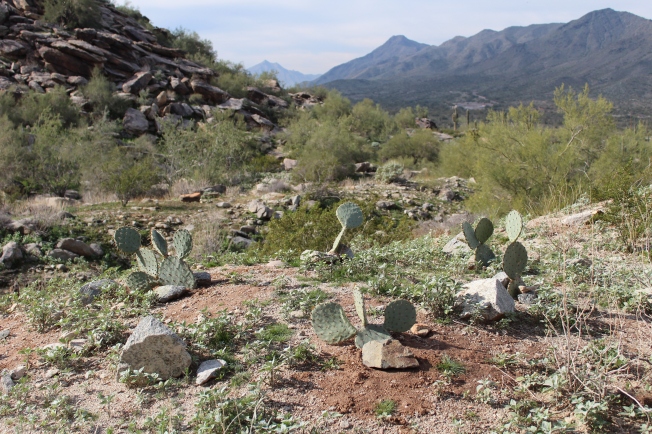 I will definitely be going back, without my camera next time. I want to enjoy the hiking without any distractions. I am so blessed to be able to immerse myself in the beauty of the desert.