Thank you to Joy of Museums for this wonderful discussion of Christ in the House of His Parents by John Everett Millais. 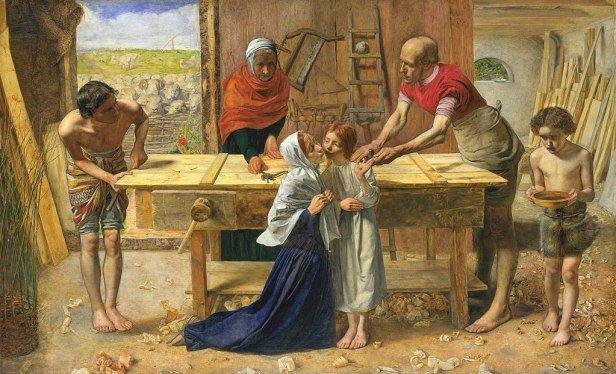 “Christ in the House of His Parents” by John Everett Milla depicts the Holy Family in Joseph’s carpentry workshop. The painting centers on the young Jesus, who has cut his hand while assisting Joseph in his workshop. The composition has a plethora of symbolism representing the theological aspects of this religious subject. The most interesting aspect of this painting was how controversial it was when it was first exhibited. It received many negative reviews because of its realistic depiction of a carpentry workshop, especially the dirt and wood shavings on the floor.

The portrayal of the Holy Family, in the painting, was in dramatic contrast to the general view of Jesus and his mother, traditionally represented in Roman togas and traditional costumes. Charles Dickens accused Millais of portraying Mary as an alcoholic who looks:

“…so hideous in her ugliness.”

Critics also objected to and criticized this new and unique portrayal of Jesus. Because of the controversy, Queen Victoria asked for the painting to be taken to Buckingham Palace so that she could view it in private.