A few years ago we had our yard landscaped, and we acquired three citrus trees: an orange, a grapefruit, and a lemon. This year we had a bumper lemon crop. I still have lemons on the tree that need to be picked. We love to squeeze fresh lemon juice into our drinking water—so refreshing!

Last week I picked a doubled-brown-paper grocery bagful of lemons. These are Meyer lemons, and they grow to the size of little Nerf footballs, with knobby little protuberances on them. My friends have told me to freeze fresh lemon juice in ice cube trays, then store the cubes in baggies in the freezer and use them as you need them. Sounds like a good idea!

I bought a bunch of plastic ice cube trays at the dollar store, got out my 40-year-old electric juicer, and squoze away. I’d been grabbing the lemons one at a time out of the bag.

When I was down to my last tray, I peeked into the bag to see how many lemons were still in there.

The good news: only three left.

The bad news: there was also a scorpion wiggling around in the bag. 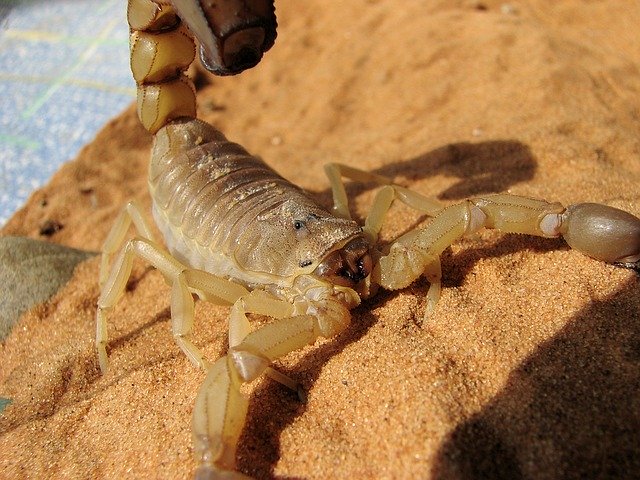 No, this is not my scorpion, but he looked alot like this. Photo by janeb13 on Pixabay.

We live in Arizona. We are no strangers to scorpions. We go for months without seeing any, and then one will tour the bathroom. We have flyswatters hanging on nails throughout the house; they are my weapon of choice against scorpions.

I took the bag outside and dumped it out on the patio. The scorpion, a common tan bark scorpion, and a big one at that, about four inches, lifted his enormous claws, stuck his powerful tail up in the air, and marched right toward me. I could have just stepped on him, but he was huge—what if I missed? He looked like he could hold a grudge.

Not seeing anything good to whack him with, I ran into the house to get my flyswatter. When I came out, he was nowhere to be found.

The next morning, I let Ralph outside, and I noticed all the water had evaporated from his bowl on the patio. So I picked it up to refill it. . .

. . . and there, underneath, was the scorpion. He took one look at me, said, “What?! You again?!” and brandished his claws and stinger at me.

I ran inside for my flyswatter, and when I returned—he was gone again.

It’s been almost a week since then and I haven’t seen him.

But that doesn’t mean he’s gone.