All sorts of info to inspire your artistic brain.

On March 4, 1678, in Venice, Italy, a little red-headed boy was born, and was immediately baptized by his midwife, though the exact reason for the haste is no longer remembered. It could have been because he was such a sickly little infant; or it could have been due to the earthquake that shook Venice that day.

It’s likely that the condition which afflicted him was asthma, but it didn’t prevent him from exercising his gifts, particularly his musical ones. Fortunately for us, he learned to play the violin and to compose music, because he was Antonio Vivaldi. 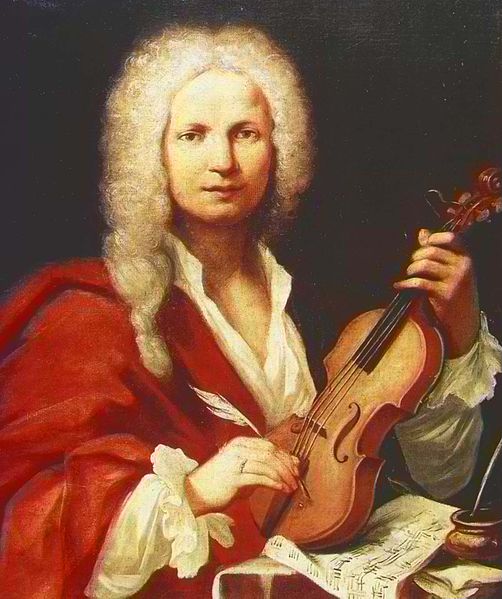 He also studied for the priesthood (possibly the result of a deal made by his mother with God during the ordeal of delivering him in the midst of the earthquake) and he was ordained in 1703. He became known as the Red Priest because of his vivid hair, which ran in his family.

Vivaldi was granted a dispensation from saying daily Mass because of his ill health. Instead of parish work, he accepted the position of Master of violin at an orphanage, Ospedale della Pietá (Devout Hospital of Mercy). The boys at the orphanage learned a trade; the girls studied music, and the most talented were invited to perform with the orphanage’s famous orchestra and chorus. Over the years he was assigned additional musical duties at the orphanage. He was devoted to the girls and composed a large body of work for them, including sacred music, such as this Gloria:

His relationship with the board of directors of the orphanage was often contentious. His contract had to be reviewed and renewed every year, and one year the board voted 7 to 6 against him. Vivaldi freelanced for the year, and the next year the board voted unanimously to hire him back, apparently recognizing his valuable contributions to the girls’ education. Again, lucky for us, because he continued to compose beautiful music for them.

Perhaps Vivaldi’s most famous work is The Four Seasons, a group of four violin concertos. Here is Summer, with soloist Mari Silje Samuelsen:

At the height of his career, Vivaldi received commissions from various European royalty. In addition to more than 60 pieces of sacred music, he also wrote over 500 concertos, 46 operas, 90 sonatas, and assorted sinfonias and chamber music.

In his later years, Vivaldi’s work fell out of fashion, and he fell on hard times. In 1740, he relocated to Vienna, hoping to receive financial support from Emperor Charles VI, but the Emperor died before that could happen. Vivaldi died in poverty on July 28, 1741.

This is a “Best of Vivaldi” two-hour playlist. I have embedded it to start with his Concerto for Two Horns. (You can also watch it on Youtube navigating from the description below the screen; then you’ll be able to read the names of the selections. Click “Show More.”)