Note: This article was originally written in 1994, published in The Annals of Saint Anne and later in Active Christian News and on Doing Life Together.

A portly man with a white beard, wearing a flannel shirt and suspender-supported blue jeans, pumped gas into his car. My then two-year-old son Matthew watched through the car window.

We saw the man again a year later as he exited a delicatessen we were approaching. This time he wore a tuxedo with a shocking pink bow tie and cummerbund. Perhaps this was the day of his daughter’s wedding.

As we passed, the man winked at Matthew and asked me, “Has he been good?” Obviously, he knew whom he resembled and enjoyed playing the part.

Every December, the man spent his free time attending preschool and Sunday school Christmas parties. He assumed the role of guest of honor at my children’s preschool. Wearing a finely tailored red velvet suit and cap trimmed in white plush, with black leather belt and boots, wire-rimmed glasses, white gloves, rouged cheeks, and his home-grown full white beard, he appeared to be the genuine article, not a department store imitation.

He listened attentively to the children’s requests, commenting on their wishes. When someone asked for a popular toy in short supply, I heard him reply, “Well, Mike, I’ll try. I’ve had a lot of orders for that one, and I’ve got my elves working overtime, but I can’t guarantee I’ll have it in time. Please don’t be disappointed if I leave you something else instead.”

Though he was willing to provide his services for free, when payment was offered to him, he said, “Thank you. I’ll send this right out to the American Cancer Society.”

Some might say the man really epitomizes the spirit of Christmas. Yet, he’s a mere caricature of the original Saint Nicholas, the legendary fourth century archbishop of Myra in Asia Minor (now Turkey). 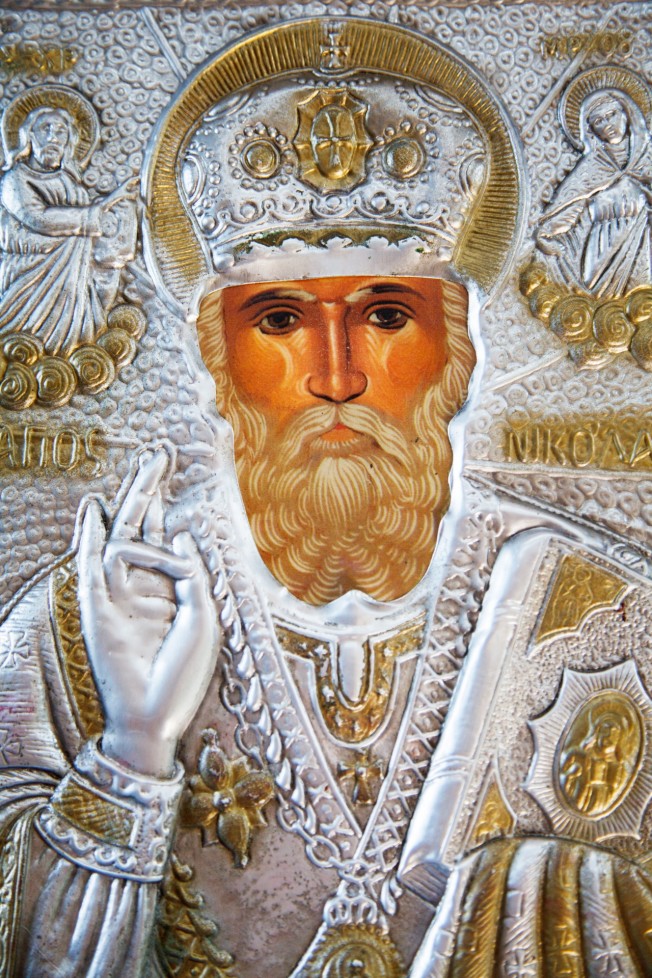 As the story goes, a poor man had three daughters, for whom he could not provide dowries. He agonized over their fates should he die. With no father, brothers, or husbands to support them, they were doomed to lives of poverty and degradation.

Nicholas, aware of the poor man’s dilemma, tossed three sacks of gold through the family’s window in the middle of the night.

Out of this folklore grew the custom of surreptitious gifts on Saint Nicholas’ Day, December 6. Eventually, someone (no doubt an advertising executive) got the bright idea of combining Saint Nicholas gift-giving with the celebration of Christmas.

Sadly, many people measure their self-worth by the quantity of presents they receive. Nothing could be more pitiful than not getting any gifts at all. Feeling guilty about the poor and the homeless who might not experience any Christmas bounty, we look for ways we can contribute.

Charities increase their appeals during the Christmas season. Many collect more money during the period between Thanksgiving and New Year’s than during the whole rest of the year.

All December long we hear about individuals or corporations who provide gifts to needy families, thereby demonstrating the “true spirit of Christmas.” We hear about scout troops that donate toys to hospitalized children, and youth groups that sing carols at retirement homes. We sigh and say, “Ah, that’s what Christmas is all about.”

Sadly, the same shelters and food banks that were inundated with offers of good cheer in December get almost no attention in January or August.

The original Nicholas gave three dowry-deprived girls what they needed for a bright future. He wasn’t merely concerned with giving toys to underprivileged children. His motivation was changing lives, bringing hope where there had been despair.

Nicholas’ own model was Jesus, the man whose birth we celebrate on December 25. Jesus described His life’s goal with these words: “…I came that they may have life, and have it abundantly” (John 10: 10b ESV). The abundant life Jesus offers is eternal life, with God, not earthly possessions.

And that’s the true spirit of Christmas.

My parents were German immigrants, and my father was a professional baker, so my childhood memories of Christmas include Springerle, Pfeffernüße, and Stollen. I’ve never baked any of them myself, but Trader Joe’s always carries Pfeffernüße and Stollen starting in November, so I buy three packages of each. Christmas wouldn’t be the same without them.

However, there is one traditional goody which I do bake for Christmas breakfast every year, which my children ask for as they come through the door later in the day:

Use a well-greased angel-food or Bundt cake pan. Place nuts in the bottom of the pan and distribute frozen rolls around the pan. Sprinkle the pudding mix over the rolls. Pour the butter/brown sugar/cinnamon mixture over the rolls and cover the pan with a clean dishtowel. Let the pan sit on the counter overnight. Bake in preheated oven at 350 degrees for 30 minutes and carefully turn over onto a large plate.

Disclaimer: my children will always remember 1999 as the Christmas Mommy almost burned the house down. I made these buns for the first time in an angel-food pan and didn’t think to put the pan on a cookie sheet. As it baked, the brown sugar coating leaked out of the bottom of the pan and dripped onto the oven floor. Reasoning that it would be bad to cook the Christmas turkey in a sugary oven, I started the self-cleaning feature of the oven. Within minutes, the sugar ignited, the house filled with smoke, and flames shot out of the oven! My husband saved the day by turning off the cleaning cycle, and scraping the burnt sugar out when the oven cooled. The moral of the story: Put the pan on a cookie sheet! 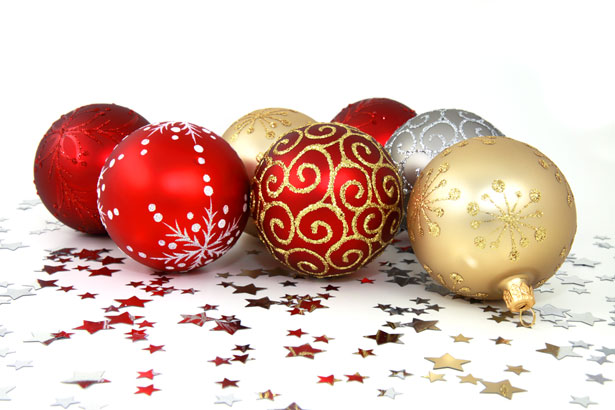 The other Christmas food tradition that my husband and I have is potato pancakes for dinner on December 23. They’re labor intensive, or I’d make them Christmas Eve. (Since we go to church Christmas Eve night, we eat take-out pizza for dinner.) Greg’s dad always made potato pancakes for Christmas Eve dinner, and Greg hated them. He described them as “gray,” and said they tasted horrible, which surprised me, because the only potato pancakes I ever had were delicious, made by Hanna, an au pair from Germany who worked for/lived with a family in our neighborhood. So I make them similar to the way Hanna did, from hand-grated potatoes with chopped onions and red and green peppers (to make them look Christmasy), fried crisp, served with applesauce. Greg loves them.

What about you? Is there a special family recipe that you always make for Christmas? Take the ARHtistic License Christmas Recipe Challenge—post the recipe on your blog, and share a link to your post in the comments below. Or if you don’t have a blog, just share a link to an online recipe or describe the food in the comments section. Then share on social media with the hashtag #ALCRC so others can find it. And, everybody who likes to try out new holiday recipes (or eat them), check back here frequently between now and New Year’s to see what others post. Happy eating! And happy holidays!

The first time I ever went caroling was as a Brownie Scout in 1960. Armed with our carol booklets, provided by the John Hancock Life Insurance Company, we went to the homes of people in the community who had chronic illnesses. We sang Here We Come A-Wassailing and O Come, All Ye Faithful and finished up with Silent Night, our shivering bodies crowded together on the front porches of each house along our route. After serenading half a dozen families, we returned to our Scout meeting room for hot cocoa (spiked with candy canes) and home-baked cookies.

Photo by The Wu’s Photo Land

For the rest of my childhood and high school and college years, going caroling was, if not annual, at least often a part of my Christmas season. And groups of carolers occasionally came to sing on our front porch.

Alas, not all of my contemporaries partook of this tradition.

When Greg and I had been married for a year or two, he bought me a Wurlitzer electronic piano that fit in our tiny living room and could be easily transported. Planning to spend Christmas Day with my in-laws, I insisted we bring the piano along, so we could all sing carols together.

What a bomb. My husband’s family would rather stick needles in their eyes than sing around the piano. They were quite content to let me play while they conversed. I felt like a lounge musician.

Many years later, our doorbell rang one December afternoon, and when Greg answered the door, carolers burst into song. Greg shut the door on them, causing me to feel mortified. “Hey, they were trying to walk into the house,” he said. (It turned out they were my neighbor’s out-of-town relatives, who thought it would be fun to serenade the cul-de-sac.)

These days, my caroling cravings are satisfied at Christmas carol services at church, but I long for the olden days when going door-to-door was common.

Do you go caroling? Do you have any caroling memories? What are your favorite carols? Share in the comments below.

Some of my favorite internet offerings for the season: