Inspiration for your creative soul:

A gargoyle is an architectural feature in the form of a carved grotesque creature with a spout designed to convey water from a roof and away from the side of a building, thereby preventing rainwater from running down masonry walls and thereby eroding the mortar between. The length of the gargoyle determines how far water is thrown from the wall.

Please click on the pictures below for credits and captions. 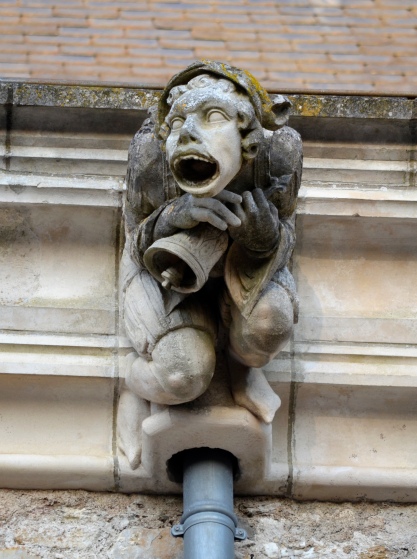 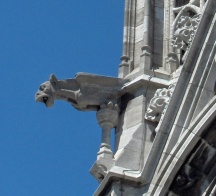 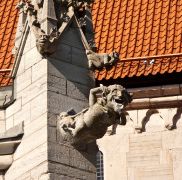 Gottesblog describes the origin of gargoyles:

The word “Gargoyle” shares a common root with the word “gargle,” which comes from the French gargouille, “throat.” A true gargoyle is a waterspout. The word is also derived from the Latin “gurgulio” and is therefore onomatopoetic, meaning “throat” and sounding like the water which gurgles as it passes through the throat. A gargoyle makes a gurgling sound as water passes through the waterspout.

Legend has it that a fierce dragon named La Gargouille with a long neck and membranous wings lived in a cave near the river Seine. The dragon caused much fear and destruction with its fiery breath, spouting water and devouring ships and men. Each year, the residents of Rouen would placate Gargouille with an offering of a victim, usually a criminal, though it was said the dragon preferred maidens. Around 600, the village was saved by St. Romanus, who promised to deal with the dragon if the townspeople agreed to be baptized and to build a church. Romanus, armed with only a crucifix, subdued the dragon by making the sign of the cross, and then led the now docile beast back to town on a leash made from his priest’s robe. La Gargouille was then burned at the stake, it is said that his head and neck were so well tempered by the heat of his fiery breath, that they would not burn. These remnants were then mounted on the town wall and became the model for gargoyles for centuries to come.

The photographs in the section below are courtesy of Creativity 103.

stone scuplture with baby stone sculpture clinging on below

stone sculpture of a monkey

stone scuplture sticking its tongue out

Although thought of as a gothic invention, gargoyle-like lion heads are found on ancient Egyptian, Greek, Etruscan, and Roman structures. To be sure, gargoyles flourished on medieval era cathedrals, most famously on Notre Dame in Paris.

Want to learn more about gargoyles? Click on the links below: