Sergei Vasilievich Rachmaninoff (Russian, 1873–1943) lived well into the 20th century, but his compositions are unabashedly Romantic. He started learning the piano at age 4 and graduated from Moscow Conservatory in 1892. Rachmaninoff’s Prelude in C-sharp minor that he wrote at age 19 became a worldwide hit (and remains a staple of piano repertoire even today). Sadly, that prelude overshadowed much of his early music, and a lack of copyright agreements between Russia and the West meant that Rachmaninoff earned little from its popularity across Europe and the U.S.

Rachmaninoff’s Choral Symphony, The Bells, Opus 35, which premiered in 1913, inspired by the poem by Edgar Allen Poe:

Rachmaninoff premiered his first symphony in 1897, but it was not well-received. Its failure launched him into a three-year depression and writer’s block. However, in 1901, his Piano Concerto No. 2 — which was dedicated to the hypnotherapist who helped him recover — brought him much success and made him a composing and performing phenomenon.

Rachmaninoff’s early body of work included a successful Symphony No. 2 and two piano trios, the beautiful Trios élégiaque, some deeply Russian choral works, many songs and three operas, as well as major sets of variations on themes by Chopin and Corelli for solo piano, plus two books of Etudes-Tableaux.

Political turmoil in Russia spurred Rachmaninoff to travel to the West in the early 1900s. He first toured the U.S. in 1909-10, performing his Third Piano Concerto in New York under Gustav Mahler. (Famous for its complexity and difficulty, this still-popular concert piece was central to the plot of Shine, the 1997 movie about the emotionally-devastated pianist David Helfgott.)

Rachmaninoff emigrated after the Russian Revolution of 1917, eventually settling in the U.S., where he was in demand as both a conductor and a pianist. His virtuosity, impressive stature, large hands and a near-photographic memory gave him a commanding stage presence.

Because Rachmaninoff lived and performed until 1943, we have many recordings of his playing — piano rolls, acoustic discs, electrical recordings. He recorded hit versions of his four piano concertos with the Philadelphia Orchestra (under Leopold Stokowski and Eugene Ormandy), along with conducting the orchestra himself in his Third Symphony, great tone poem Isle of the Dead and popular Vocalise. He also recorded performances of Beethoven, Schubert, Grieg, Mendelssohn, Schumann, Chopin, Tchaikovsky, Rimsky-Korsakov and Scriabin.

He holds a well-deserved reputation for being one of the greatest pianists and composers who ever lived.

Once again I am working on the Rachmaninoff Prelude in C# Minor.

I first “learned” it as an eighth grader. I was never able to play it fluidly, instead stopping over and over to decipher the ledger lines. I think Sister Mercy, my piano teacher, decided the most merciful thing to do was assign me a different piece.

I revisited it every few years as an adult, resolving that this time I’d master it, but finally giving up.

It’s now come into my hands again, and I alternate between loving it and despising it.

If you don’t know the prelude I mean, here it is, from a piano roll Rachmaninoff created himself; the visual is the actual sheet music.

The piece has three sections: a slow introduction, a frantic middle section that moves in triplets, and an ending similar to the beginning that is marked tempo primo, although Rachmaninoff’s piano roll plays it faster.

Years ago it occurred to me that I could listen to the piece on YouTube. I was shocked to discover that the melody of the first and third sections in not the bell-like chords, but the deep bass octave three-note motifs. Each of those sections also includes a run of nineteen overlapping chords, in which the right thumb sometimes crosses over the left, then under the left.

The agitato section in the middle has the most beautiful Russian harmonies in chromatic arpeggios—that is, they’re beautiful as you’re learning them at a slow tempo. Played as intended, the first notes of each triplet form a step-wise motif of four or two notes; the rest of the notes disappear in mud. 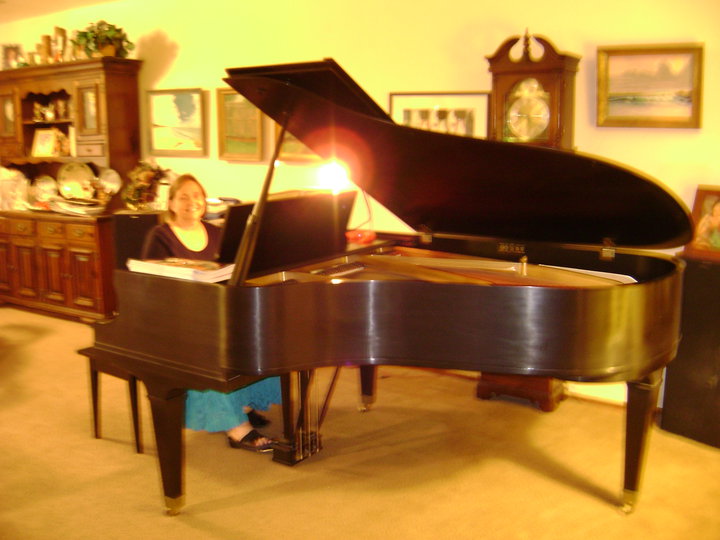 The final section recalls the beginning, except it’s more complicated. Now the pianist must read four staves instead of two, and the third staff changes from bass clef to treble clef and back to bass clef again. Each hand plays four-note chords that are quite discordant. I often recheck my chords only to find that I forgot about an accidental that occurred earlier in the measure, but sometimes the sour-sounding notes are absolutely correct. Some of those chords are virtually impossible for a small hand to play—a wide stretch between the second and third fingers, with an e# next to a f# with the index finger and thumb in the left hand. Honestly, who writes chords like that? To understand how I feel, look at the drawing of the hands below Rachmaninoff’s name in this illustration.

I think you need a creative solution to playing these impossible notes:

(Actually, I am impressed that Joo can even correctly position those sticks.)

Have you mastered the Rachmaninoff Prelude in C# Minor? Do you have any tips for me? Please share in the comments below.

Valentina Lisitska is one of my favorite pianists. She often plays pieces much faster than anyone else. Plus, the Rach Prelude in g minor is drop-dead gorgeous.

ARHtistic License is a forum for creative ideas. Be part of the dialog! Add your thoughts and experiences in the comments section below each post. Feel free to add a relevant link.
Join 1,391 other subscribers