The frames of Jan van Eyck’s (born circa 1390 – died  July 9, 1441) diptych masterpiece, The Crucifixion and the Last Judgment, each measure just 22.2 inches high and 7.8 inches wide; yet, they depict the horror of these two biblical events in great detail. 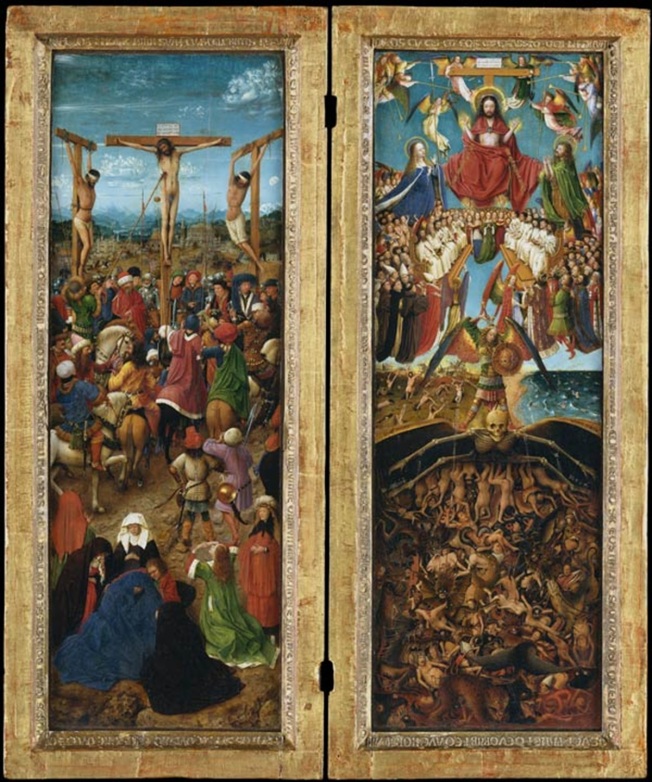 The Crucifixion and the Last Judgment by Jan van Eyck

The left-hand panel is the crucifixion scene. Christ’s followers grieve in the foreground. St. John supports Mary, the mother of Jesus. From the gospel record, we surmise that the two women looking on and weeping are Salome (wife of Zebedee and mother of the apostles James and John) and Mary, the wife of Cleophas. Nearby, in the green robe, is Mary Magdalene, her eyes on her crucified Savior. 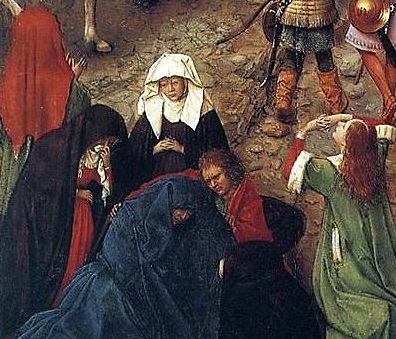 The middle ground of the painting holds other onlookers, some concerned, some indifferent, and some sneering, including Roman soldiers, high priests, and temple elders. 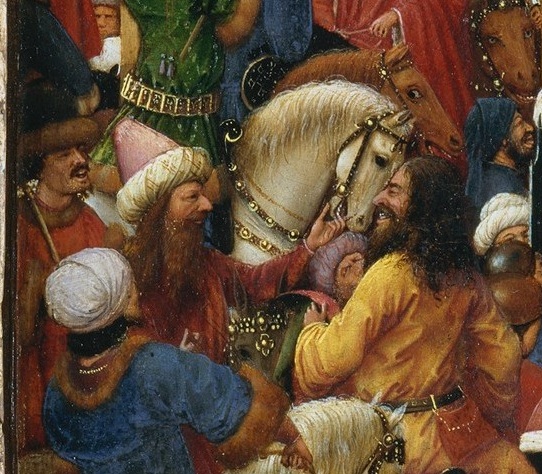 At the top of the panel are the three crosses at Golgotha where Jesus and two thieves were executed. A soldier has just plunged a spear into the already-dead Christ’s side. Jerusalem is visible in the background.

The right hand panel of the diptych, depicting the Last Judgment, is also divided horizontally into three areas, representing (from top to bottom) heaven, earth and hell.

The entrance to hell seems to be the rear end of a skeletal representation of Death. The souls drop in head first to be tormented by demons with tentacles and mouths full of sharp, pointed fangs ready to tear them apart. Some of the damned appear to be clergy and  royalty–undoubtedly a risky undertaking for van Eyck.

The Garden of Earthly Delights by Hieronymus Bosch

Detail of The Garden of Earthly Delights

Back to van Eyck’s Last Judgment, between heaven and hell, the dead rise from their graves and from the sea. The Archangel Michael stands on death’s shoulders. 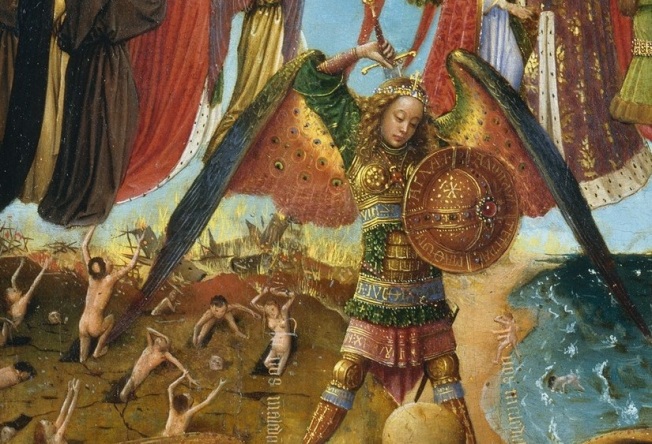 The upper portion of the panel shows the second coming of Christ. Four angels hover around Him, holding the cross (the symbol of our salvation), a crown of thorns, nails, and a sponge upon a spear. An angelic choir blows trumpets. 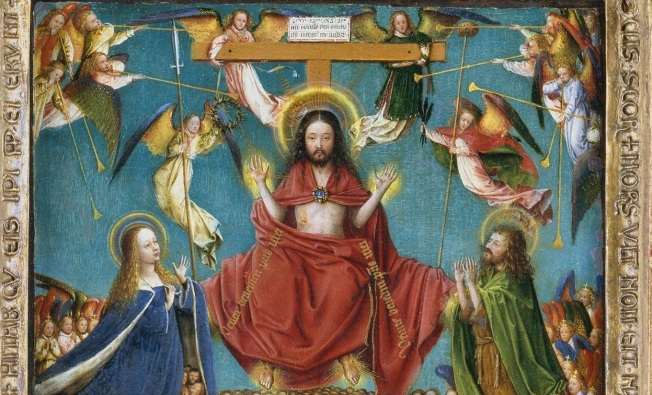 The Apostles, dressed in white robes, sit on two facing benches below Christ. Two angels usher the groups gathered at each side of the benches.

The heavenly portion of this panel is considered to have been painted more broadly and with less skill than the other sections, and is thusly attributed to other members of van Eyck’s workshop.

During the Renaissance, there were no art schools. In order to learn the art of painting, one needed to serve an apprenticeship to a master painter in his workshop.

Most apprentices entered artists’ shops in their early teens because they were members of families already engaged in painting, or because their parents decided that their son would become a painter or sculptor. Talent was not a requirement. He was there to learn a craft, and to make the master’s style his own. The artist Cennino Cennini (1370-1440) stated in his shop manual that the apprentice should not experiment with his own style until he had learned to duplicate his master’s.

The apprentice’s task was to assist the artist in the preparation of materials and, once the design had been formulated, to help him produce the work. More often they did the less important and quite tedious decorative parts of frescoes or statues.

The apprenticeship could last a decade or more. Training involved a series of progressive steps from grinding pigments, to copying, to executing the master’s design, and finally to creating one’s own artwork.

For more detailed information about these topics, click the links below: