My husband, Greg, is a lifelong enthusiast of the sport of shooting, including reloading ammunition, plinking, target shooting, and skeet shooting. He collects books about guns, and he pores over the illustrations, admiring the craftsmanship and aesthetics. He improved a few of the guns in his own collection, rebrowning or rebluing the barrels as appropriate, and refinishing the stocks.

His appreciation for workmanship led him to try his hand at building derringers (nineteenth century pistols like the one used notoriously by John Wilkes Booth) from kits. This involved taking a rough-cut wooden stock and shaping it to fit comfortably in the hand, carefully inletting it to accommodate the mechanical workings of the gun, and staining and finishing his product. It was largely a process of trial and error, with some unsatisfactory results, and other more successful ones, some of the better pieces found new homes as gifts to friends and admirers.

Then he built a blunderbuss, a muzzle-loader with a flared barrel (like the Pilgrims might have used), and decided to do something more with it—carve the stock, like some of the historical examples he saw in his books. So far he’s made four, each with a unique design. (Click on the images for a larger view.) 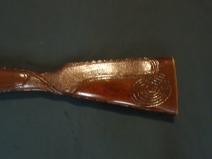 Greg bought himself a Ruger® 10/22® rifle and the plain stock suddenly looked like an empty canvas to him. Yielding to his artistic impulses, he removed the factory finish, and carved patterns into the stock. He’s since carved six more with various designs, including a dachshund who looks suspiciously like Rudi, who lives at our house. 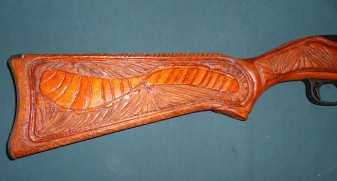 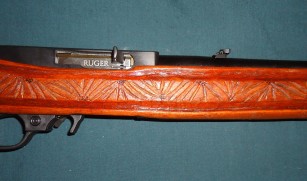 When he starts working on a stock, he spends time visualizing what it could become, sometimes choosing a theme. For example, one of his blunderbusses has a boat on one side and a bluefish on the other, a reference to his youth on the New Jersey shore, when he spent many days fishing with his father. “I’m taking a common thing and making it into something special,” he says. His main carving tool is a simple X-ACTO® knife. He buys ten packages of blades at a time. He also uses a Dremel® tool, an engraver, a woodburner, various sanding tools, and tiny paintbrushes capable of depositing stain in the skinniest of indentations. He keeps Bandaids® handy for the occasional carving accidents.

Greg often starts by marking the boundaries of his design area in pencil, then carving the borders. He’ll sketch out his motif on paper first, then transfer it to the wood in pencil. First he’ll carve roughly, then go back and refine, rounding some edges, beveling others, gouging some backgrounds, and stippling other areas, producing a variety of textures. After staining, he applies multiple coats of oil to finish the stock. 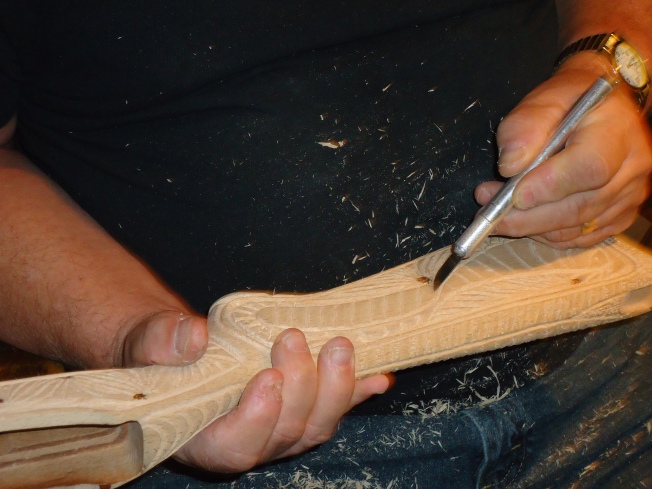 Retired after thirty-plus years of teaching in elementary school, Greg feels fortunate to have the time and means to immerse himself in wood stock carving.

What creative interests do you have that you are pursuing now, or hope to, once you retire?