Of course, I’ve always been aware of Eric Clapton and known that I like him. That said, I really knew nothing about him, so I happily downloaded the Kindle version of his autobiography when it was on sale.

One of my biggest surprises is how many bands he was part of that I loved when I was a teenager: the Yardbirds, Cream, Derek and the Dominos. I think of him as a solo performer, yet he’s collaborated with hundreds of great musicians.

Here’s Layla, performed in 1999 at a concert at Madison Square Garden.

Another surprise, and not a pleasant one, is how addicted he was to drugs and alcohol. The first half of the book contains example after example of Clapton’s binges with cocaine, heroin, and other substances. Frankly, for half his life, he was a jerk, and it’s painful to read about it. I always wonder how it is possible for people who are so impaired to make beautiful music. I guess they focus the functional part of their brains on the music, and their relationships suffer the consequences of their drug and alcohol abuse. This was certainly the case in Clapton’s life. 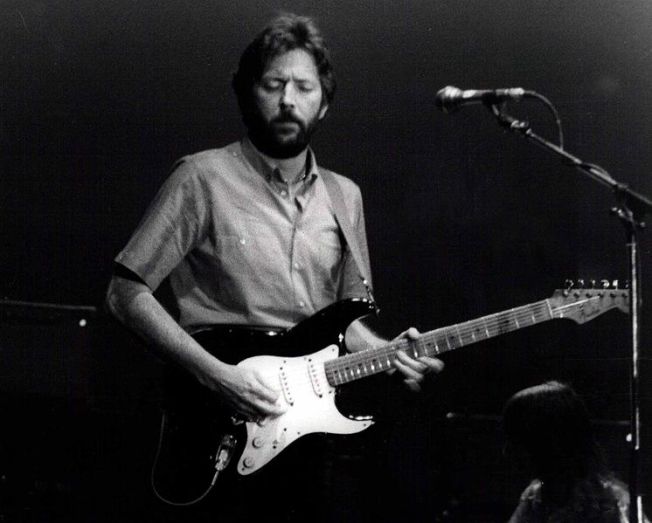 The good news is that he beat his drug addiction around 1973, though he continued to drink until 1987.

One big motivation for getting sober was the birth of his son, Conor, in 1986, the result of a year-long affair. Conor died in 1991 from a fall from his apartment window. Clapton wrote “Tears in Heaven” in his memory. At the time, I wondered how anyone could have been so inattentive as to let a child fall out a window. Reading Clapton’s account in the book put some of my outrage to rest.

About remaining sober, Clapton writes that in the 1990s:

On recent trips to my house on Galleon Beach in Antiqua, I had become increasingly disillusioned by the number of addicts and drunks who were springing up, or maybe it was just that I was noticing them more now…Coming home from one trip there, I confided in Chris and Richard [Steele, who ran the rehab section of the London Priory Clinic] about this dilemma, saying that I was thinking of selling and not going back again, and they both said… “You’ve got the money; build a treatment center.”

…The object would be to build a clinic in Antigua, with a view to servicing the entire Caribbean area. It was accepted that few clients would initially come in from the local communities, and that we would need to promote the center elsewhere, drawing on people from America and Europe who would pay to come there and thus fund scholarship beds for the locals who couldn’t afford it. It was a Robin Hood scheme really; take from the rich to feed the poor…I was excited by the idea of doing something to pay back for all the good times and spiritual healing I’d got in Antigua…

There was absolutely no notion of what recovery was in the Caribbean. Alcoholism was still regarded as immoral or sinful behavior there, with jail time and social ostracism being the only practiced solutions. In order to set up a treatment center here, we were going to have to educate and to a certain extent emancipate the entire community…

What right did I have to try and bring these kinds of changes to a community that, on the face of it, just wanted to be left alone? …In order to stay sober, I had to help others get sober.

1998 marked the opening of the Crossroads Centre Antigua, which Clapton founded. I’ve watched Crossroad Guitar Festival concert videos on MTV without realizing these were benefits to raise money for the Crossroads Centre. This was the third big surprise Clapton revealed to me. After my disappointment in the first half of the book, learning how Clapton turned his life around made the story much more palatable.

Self doubt kills creativity, and I cannot let that happen. –Cathy Maxwell

The Lord your God is with you, he is mighty to save. He will take great delight in you, he will quiet you with his love, he will rejoice over you with singing (Zephaniah 3: 17 NIV).

Our Advent Calendar previously appeared on one of my favorite blogs, Parenting with a Smile. I was so blessed by Linda’s Christmas posts last year that I asked her if I could share some of them on ARHtistic License this year. Since today is the first Sunday in Advent, this article is especially apropos. 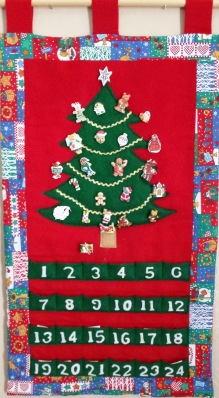 It’s Timeless Tuesday here at PWAS so I wanted to share with you one of our most timeless Christmas traditions, my daughter’s advent calendar.

My daughter, Ashley, is my parents’ youngest grandchild. She is seventeen years younger than the oldest grandchild. Around each grandchild’s third Christmas, my mom made them an advent calendar.

Mom lovingly sewed each calendar using the same pattern, yet made each one unique. Some of the pockets have numbers on them and some have bows. The Christmas trees on some have trunks and others do not. Some have cloth borders and some are entirely felt.  Finally, Mom added a hand-written label on the back of each one that had a special message of love to that child.

Once the calendar was sewn, Mom went to the store and found little Christmas do-dads that would fit inside the tiny pockets. She stuck a strip of Velcro on the back of each item so it could stick to the felt Christmas tree.

On December 1, the child takes the ornament from the first pocket and sticks it on the tree. The last ornament to be pulled from the last pocket is the one that goes on top of the tree. For some it’s a star, for others it’s an angel.

All three of my children and all their cousins have enjoyed their advent calendars through the years. As they’ve grown up and moved away, their calendars have gone with them. Some share them with their spouses and their own children now. It’s a reminder of home, family, and a grandma who loves them. 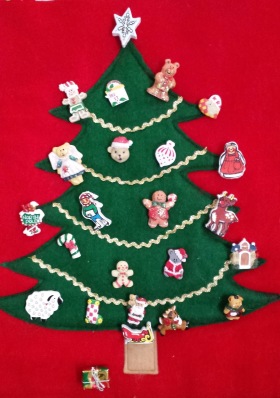 Does your family have an advent calendar? Share about it in the comments.

Every Sunday, the Weekend Writing Warriors share 8-10-sentence snippets from their works-in-progress on their blogs for others to read and comment on. Join the fun! Click on the link to see the full list.

Hillary’s dad, packing for his honeymoon with his new wife, just asked Hillary if she knows where the flashlight is. (She’s stashed it in the woods, where she plans to camp while her parents are away, because she ‘s entrusted with protecting a unicorn against hunters. Of course, her dad knows nothing about this.)

“Isn’t it in the tool drawer in the kitchen?”

Hillary knew exactly where it was—safely tied up in her pillowcase in the maple tree by the clearing in the woods. “Do you really need a flashlight for your trip?”

“I’ll see if I can find it.” She went downstairs and fumbled loudly in the tool drawer for show. “I’ll go look in the garage,” she called. The screen door slammed behind her. She had no intention of confessing that she’d taken the flashlight, because then she’d have to explain why.

I know it’s short (the limit is ten sentences), but what do you think of this small excerpt from Chapter 17? Any suggestions on how I can make it better? Please comment below.

While I was working on Shaker Design, I began thinking about other kinds of shakers, and vintage salt and pepper shakers in particular. They’re such sought-after collectibles, and many are quite inexpensive. Time for another Etsy binge.

Since salt and pepper shakers generally come in pairs, one common theme is couples (click on the descriptive links below the images for purchasing information):

Here are some elegant shakers: 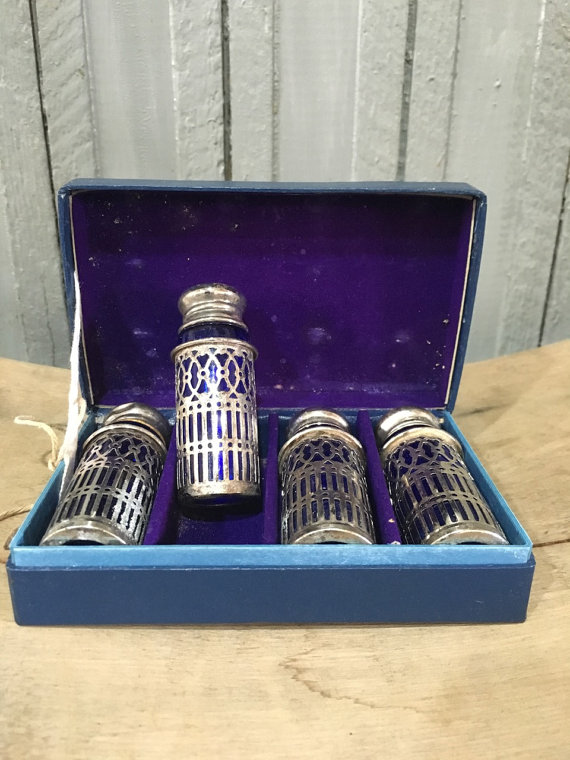 And some from the animal kingdom: 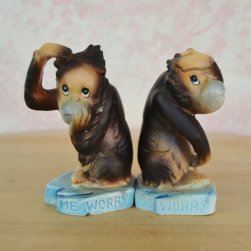 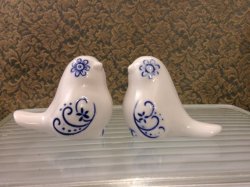 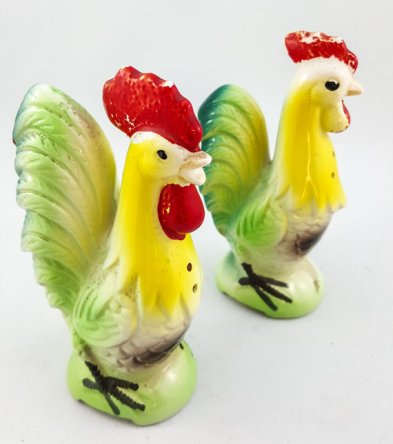 And some final couples, some of them rather creepy. (You can click on the smaller images to enlarge them.) 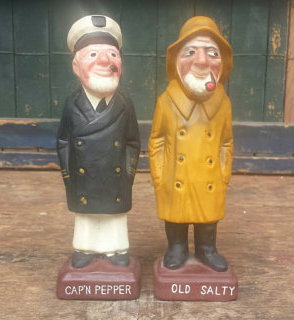 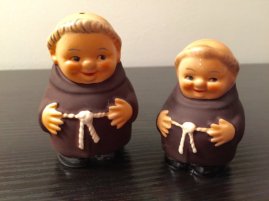 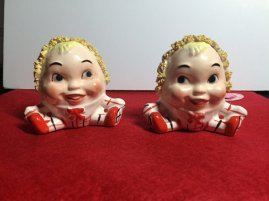 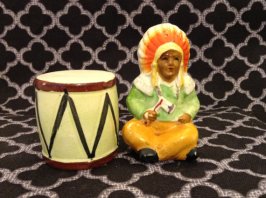 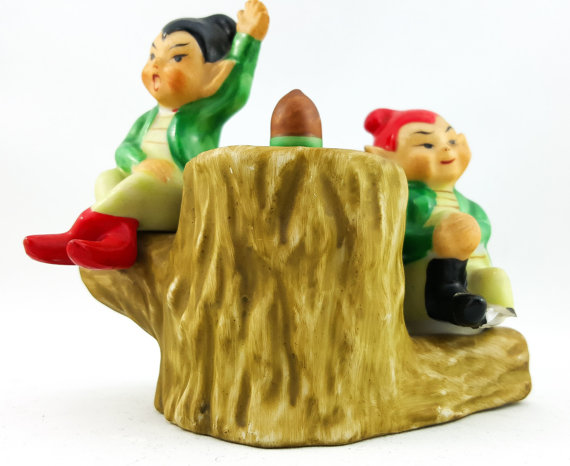 Looking at Mr. and Mrs. Santa and the chickens took me back to my childhood during the 50s and 60s. The old fisherman reminded me of the 70s, and the geese reminded me of an 80s decorating trend.

My favorites, though, are the kissing couple and the Scotties.

What about you? Which are your favorites? Do you collect shakers? Share in the comments below. 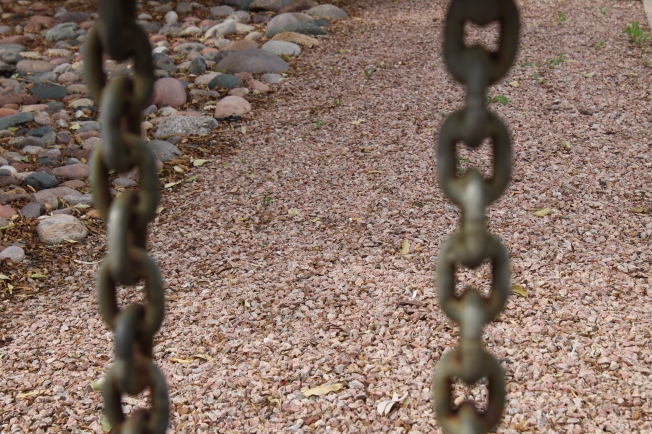 These chains are actually part of a mailbox stand. My submission for Cee’s Odd Ball Photo Challenge this week.

A dozen articles especially chosen to ignite a spark of creativity in you today.

This article appeared previously on Doing Life Together.

My mother-in-law had a Thanksgiving Day tradition of stacking all her Christmas records on the record player spindle and playing them non-stop until New Years. That’s how we knew it was time to get ready for Christmas.

Even though retail establishments have been ready for Christmas for months, Black Friday is the day I start to get ready. (But I won’t go out shopping today. That would be crazy.)

I’ve probably already bought some Christmas presents. I hope I can remember what I bought and where I put them . . .

This is my process of holiday preparation:

Star berry #zentangle
Ralph got to visit Santa today @petco. And Santa is my son Matt. #petcoholiday
Blocks are all done! I hope the elves can get them all sewn together pronto. #Christmasquilt
Twistee, Flux, Luv-a, Ginili #zentangle
Christmas #quilt in progress. (don’t tell—it’s a surprise) Hope the elves get it done in time.
Each time I add another strip, I’m delighted with the way my log cabin blocks are turning out. #quilting