I discovered the novelist Anne Tyler in the early 1990s. The movie The Accidental Tourist had come and gone, and I’d never seen it. One day while browsing in my neighborhood bookstore, I found a $2.50 pre-read paperback copy and decided to see what all the fuss was about.

Macon Leary’s wife had left him after the death of their only son, and Macon wasn’t coping very well. In fact, his behavior could only be described as bizarre. He began optimizing his life by systematically rethinking and reorganizing his routines, like keeping a popcorn popper and an electric percolator connected to a timer on the bedroom windowsill, so he could awaken to the aromas of coffee and popcorn, his new standard breakfast menu. He also washed his clothes daily (with his feet) while taking his shower. And so he could sleep in fresh sheets every night without the pesky task of making the bed, he sewed the sheets into envelopes that could just be placed atop the mattress.

By page 15, I was ready to give up reading. Macon was just too quirky to be true. But then I thought about some of the people I know, who have made their own adaptations to what I might consider “normal” routines. Suddenly, Macon didn’t seem all that strange anymore, so I returned to the book. 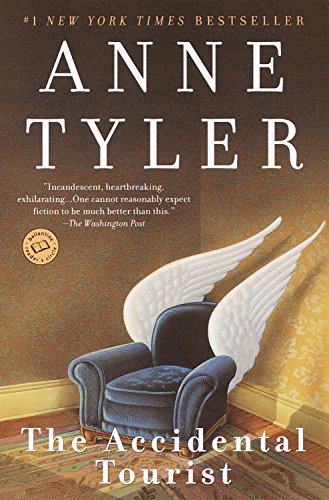 And read another Tyler novel, and another, and another–maybe a dozen in all. She was my favorite author for a decade.

Recently, I searched my house for fresh fiction, and it seemed I didn’t have a single unread novel, though nonfiction is stacked in To-Be-Read towers. Then I remembered how much I had once loved Anne Tyler, and decided I would read her books in sequence.

I determined that the earliest Tyler book I own is The Clock Winder. I don’t remember ever reading it, and starting it now, I just couldn’t get into it. It has a very slow opening that didn’t capture my attention. So, I abandoned that idea and reread The Accidental Tourist, because I remembered that it started my obsession with her.

In a few minutes, I was immersed in Macon’s world.

The author of a series of city guidebooks for business travelers, Macon is especially suited for his job of finding options that would make reluctant jet-setters feel as though they weren’t far from home.

Not long after his wife, Sarah, abandons him, he breaks his leg (in an accident precipitated by his deceased son’s dog, Edward), forcing him to move into the family home that his two brothers and his sister still occupy.

Edward is also not handling Ethan’s (the son’s) death well. His behavior is becoming increasingly aggressive. Macon’s siblings pressure him to get rid of the dog, but he can’t—it would be like losing the last part of Ethan. So he calls Muriel, a dog trainer he met when boarding Edward at the Meow-Bow.

Muriel has problems of her own. She’s single, raising a son with multiple health problems. She’s barely getting by, despite shopping at thrift stores and working several jobs. And she falls head over heels for Macon.

While preparing this review, I happened upon this clip from the movie on YouTube, one of the earliest interactions between Macon and Muriel:

I still haven’t seen the movie, and now I really don’t want to. It seems super dated, with weak acting. In 1989, Geena Davis won the Oscar for Best Supporting Actress for this role. Why? The Muriel in my head is much dumpier than Geena Davis, and shorter. And has a shrill voice with an East Coast accent. Geena Davis doesn’t even come close. And William Hurt is way more together than the Macon in my head.

Sometimes watching the movie of a book you already love is a satisfying experience. Like the Harry Potter and the Hunger Games movies. (Am I giving away that YA fantasy and dystopia are my favorite genres?) Disclaimer: I am not saying the movies are as good as the books; I’m only saying they are satisfying. But a movie cannot duplicate the depth of the written form. A movie generally has a two-hour time limit. In my opinion, you can’t reproduce the detail of a 342-page book in a two-hour film.

When you read a book, especially if you are reading it in short snatches over the course of several days or weeks, you spend time in that world. You mull over what’s happening. You live with the characters. You get to know them as if they were your friends, or at least co-workers or neighbors. And, usually, the book is much better than the movie.

In the early chapters of The Accidental Tourist, I hated Sarah for dumping Macon. They should have gone for counseling or something. Their marriage could have been put back together.

When Muriel enters Macon’s life, he resists her with all his power, but she is relentless in her pursuit. I began to notice her vulnerability behind her pushiness, her genuine love for her son Alexander, and the sweetness behind her desperation. I began to root for her.

And when Sarah resurfaces, reluctant to sign divorce papers, I discerned how much more emotionally stable she is, compared to Macon. (Or Muriel.) Macon didn’t deserve her—she was too good for him. But as she tenderly made her case for reconciliation, she won me over.

Subplots in the story revolve around the dysfunctionality of the rest of the Leary family. Nevertheless, the sister, Rose, is wooed by Macon’s boss—but their newly-married life deviates from Julian’s expectations.

I’m not going to spoil the ending for you. I’ll just say that for the first time in his life, Macon makes a decision based on what he wants, rather than what those around him expect.

The Accidental Tourist came out in 1985, but it’s still relevant, even without any of the technological references that make their way into modern fiction. (Did you notice the old-fashioned credit card transaction in the clip?) If you can get past the discomfort of its quirkiness, you’re in for an engaging read.

Have you read The Accidental Tourist? Do you like Anne Tyler’s novels? Which is your favorite? In general, do you like books or their movie versions better? Share in the comments below.