As a young soldier stationed in Korea during the late 1960s, Robert Holewinski filled his off-duty hours painting scenes from Disney movies. It wasn’t until after he returned to civilian life that he began studying the old masters. “There have been four influences for me,” says Holewinski, “Van Gogh, Cezanne, Whistler, and early Picasso. Many of my landscape paintings have been compared to Van Gogh’s brushwork, which is quite a compliment for me.

“For me, seeing and ‘feeling’ the brushstrokes is a very important aspect of a painting. I generally think that real art in painting began with the Impressionists as they broke away from trying to create a photographic image on canvas. And not only did Vincent show his brushstrokes, but he made them part of the design of the painting, creating a sky with swirling blue lines. I would say that my interest in art and paintings really started with the works of Van Gogh with his use of color and brushstroke.”

While living in Washington, D.C., Holewinski made weekend forays into the countryside of Virginia and Maryland. When the landscape spoke to him, he’d pull over, place a canvas on the hood of his car, and get busy.

“Ninety-five percent of my paintings begin with a photograph that I have taken during our travels,” says Holewinski. “In the past I would have made sketches at the location to then later use for a painting.  A photograph is a better source as it captures not only the image but brings back the exact feelings I had when I took the photo.”

Click on the images below to see enlargements and titles. 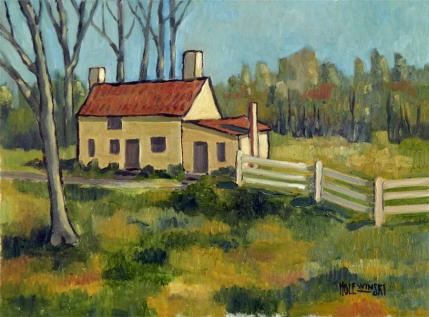 Holewinski worked for thirteen years as a creative product and package designer for Johnson & Johnson, and then landed his dream job with The Walt Disney Company as a Product Design Manager. He still paints character portraits for Disney.

I particularly like his Italian landscapes and city scenes.

Boats in a Venetian Canal 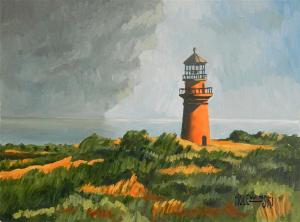 “My process is fairly simple,” says Holewinski. “Using one of my photos, enlarged on a copier, I paint standing up with a fresh sheet of 140 lb. watercolor paper taped to a wall. I paint in oil on heavy 140 lb. watercolor paper instead of canvas because it decreases the drying time of the oils and lets me work without smearing wet paint which is what happens when working on canvas. Most of my paintings are roughly 18 x 24 in size. I do not rough sketch anymore, but rather use black paint and my brush to create an outline image on the paper. From there I work on the entire painting, advancing it in total. I usually let the almost complete painting ‘rest’ overnight, and the following day I evaluate what I have so far created, and then make adjustments, add  color, apply the last brushstrokes. On average, my paintings take around four hours to complete.”

These paintings hint at Picasso’s influence: 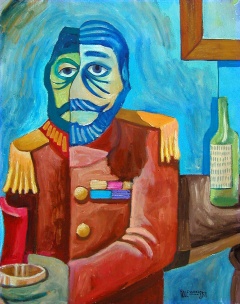 Holewinski paints in his garage studio: 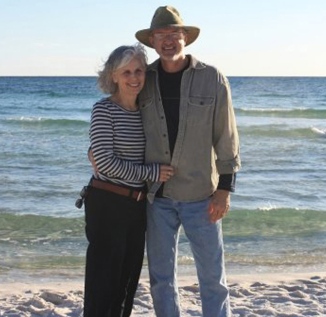 Holewinski with his lovely wife, Deb.

Robert Holewinski’s work is available through UGallery and ArtPal. The original oils run $750-$1475. Prints start at $5.97.

All images © by Robert Holewinski

ARHtistic License is a forum for creative ideas. Be part of the dialog! Add your thoughts and experiences in the comments section below each post. Feel free to add a relevant link.
Join 1,382 other followers

Learning how to use my #HandiQuilterMoxie with #ProStitcherLite (robotic, not free motion) #longarmquilting #quilting #amquilting
Working on learning how to use my quilting machine. I have a slow learning curve. These are supposed to look like “e” and “l”. #quilting #longarmquilting #freemotionquilting
Got my Moxie! #longarm #quilting
#electionday2022 #voting #votingpoem
Heart Stack #inktober2022 #twinchietober #zentangle
Champ by Antje Romers #inktober2022 #twinchietober #zentangle